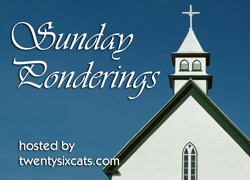 I apologize for the break in the Sunday Ponderings. With Christmas, traveling, and with skipping church a couple of weeks in a row, it was just easier for me to take a break. :-)

A few weeks ago we were visiting a church in another city. At one point in the service something interesting happened. The pastor announced that there was going to be a baptism, and he called two couples to the front. He put his arms around one of the couples, and looked very serious.

“I got a call this week telling me of Sara’s* pregnancy,” he began. (*name changed to protect privacy) The girl looked to the ground, and I wondered at the tears in her eyes. She was no more than 17 or 18 years old, and as the pastor talked we found out that this young couple was not married.

I felt like I was sitting in on a private family meeting, but it was very beautiful. The second couple at the front of the church were a mentoring couple, and they laid their hands on Sara and her boyfriend, supporting them. Sara was weeping at this point, and her boyfriend attempting the stoic expression. The pastor reminded the church that this young couple needed so much support and love right now, as they get married and have their baby. He said that they have already been forgiven by the people whom they have hurt the most: their parents, the church leaders, and God. He asked the congregation to remember this sin like how God remembers it, as if it’s banished from the ends of the earth.

I couldn’t help the tears coming into my own eyes. What a beautiful display of love and forgiveness. I also thought it wise for the pastor to bring it into the open and ask people not to talk about it anymore – what a good way to rid the elephant from the room, and allow people to be able to offer their support. And mostly – how courageous Sara and her boyfriend must have been, to stand in front of the congregation and have their sins aired. I don’t know that I could have done it. The pastor spoke with love, yet not diminishing the seriousness of the issue. It wasn’t a public flogging, but rather a beautiful picture of family. The pastor then baptized the boyfriend. (Sara apparently had already been baptized some time before.)

I am glad I got to witness this. It makes me realize how important a church family is.

“Bear with each other and forgive whatever grievances you may have against one another. Forgive as the Lord forgave you. And over all these virtues put on love, which binds them all together in perfect unity.” Colossians 3:13-14