Well this birth was TOTALLY not what I expected at all! And as I promised, it’s an interesting story… I’ve been dying to share it but getting to a computer for any length of time has been difficult. :-) 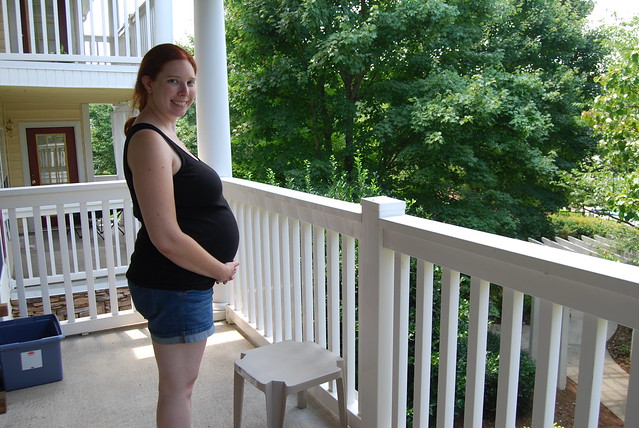 36 weeks and 2 days, almost three weeks before Savannah was born

I should probably skip the whole beginning, the part where my contractions started Thursday night. At the time I remember thinking, “Oh I should write this stuff down now so I remember!” But little did I know that the beginning would seem so trivial after it all was over. :-)

I had mild contractions on and off all day on Friday. I called the midwife Friday morning to tell her I was in labor. I tried to spend the day distracting myself – walking or sleeping. The sleeping thing didn’t happen, but I did try to be on my feet. Towards the evening they were getting worse. I was going to walk around Target with Paul, but I decided I wasn’t up for that. The pain was all in my back and it was starting to get intense!

They were about 15-20 minutes apart all night on Friday night, and I didn’t get much sleep. Paul stayed home from work on Saturday after I finally threatened him that if he went to work I would be very upset! He was great during this whole time – coming to my side with every contraction, and dutifully timing them so we’d know when to go to the hospital. At noon on Saturday, they were 6 to 7 minutes apart and I called the midwife again. She said to call back when they were 5 or less, and we’d go to the hospital. She warned me to get rest if I could, because I probably had 8 hours of labor ahead of me! (Ha! Famous last words!)

I really don’t remember much at this point. I was so tired – I actually laid on the couch and slept between the contractions! They were getting intense. I’d call Paul’s name and grab onto his hand until they passed. He put a lot of pressure on my back which really helped. I kept asking him, “Are they 5 minutes yet?” We were getting close… under 6 minutes apart is the last I remember him telling me, but we hadn’t hit the 5 minute mark yet. Finally I decided warm water would help make me feel better and I asked Paul to help me to the bathroom. Everything is a blur now… I remember feeling the sensation to push, and I thought it was just a bowel movement which confused me. My water broke at this point, but I didn’t realize at the time that’s what it was. I went into the bathroom and sat on the toilet (still thinking bowel movement). Everything hurt so bad and I just clutched Paul’s arm with each contraction. I remember him saying, “They’re coming really close together now.”

Something inside me told me that this wasn’t a bowel movement. I couldn’t figure out why my body was telling me to push. I reached down and felt a head between my legs and screamed to Paul, “I felt her head!” Then I went on to inform him that I couldn’t do it. He’s like, “Well you have to!” I just remember being scared – everything was happening so fast! It was only like one or two more contractions and suddenly the baby popped out and into the toilet! I jumped up and screamed; at the same moment Paul grabbed the baby. She gasped for breath and started crying.

My first reactions were confusion and fear – what had just happened? I knew from my birth class that if a baby is born at home, you need to check to see if she’s breathing (crying) and if she’s pink. I could see her skin changing quickly from white to pink, so I didn’t worry. I also knew it was really important not to let the umbilical cord break. I sat back on the toilet and held her gingerly while Paul ran and got the phone. I was just in shock… I couldn’t do anything but sit there and shake. Paul called the midwife and she told us to come in to the hospital right away. He draped me with towels and we got into the car. I remember looking behind me at all the bloody mess in the bathroom, and Paul assuring me that we would clean it up later, that we needed to get to the hospital. I just sat there half-dazed, clutching the baby, with the cord still attached to me.

Savannah was born at 1:30pm. That whole last part happened so fast – there was no time to do anything but react. I am sooo grateful that we talked in our birth class about when you don’t make it to the hospital. It really helped calm me, as scared as I was at the time. And I knew that we didn’t need to call an ambulance since she was crying and her color was good. :-)

Savannah’s first car ride was in my arms in the front seat without either of us buckled in. :-) Ha! Not even an hour old and already breaking the law. We got to the hospital and they were expecting us – they rushed me back to the maternity section in a wheelchair. At this point, I was unaware of anything – just sitting there clutching the baby making sure not to break that umbilical cord! We were put in a room and immediately everyone was there to help us. They cut the baby’s cord, and my midwife delivered the placenta about 50 minutes after Savannah came out. So, I guess we made sure she got all the nutrients? :-)

I had torn a little bit, so the midwife stitched me up. THAT part was the worst – worse than actually pushing the baby out! Oh my gosh. We stayed in the room for an hour; they checked Savannah over and said she was healthy and perfect. They helped me up to move to the postpartum room, and I passed out on the way there. At this point I was so dazed; I remember sitting there and then suddenly there were tons of nurses around and they were making me smell something terrible and telling me to wake up and talk to them. I kept hearing, “Redhead… redhead…” Later they told me that redheads tend to have a lot of problems with bleeding and passing out. I guess I was just doing what comes naturally. :-) 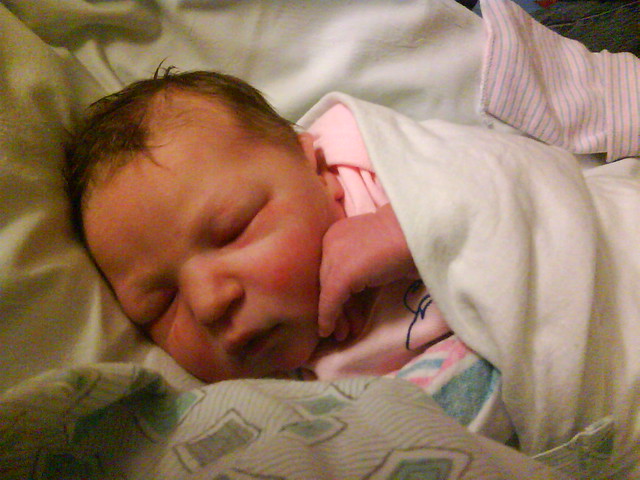 First picture after things settled down enough to take one!

We got settled in the room, finally some peace after a pretty traumatic day! We set about making phone calls since we didn’t get a chance really to tell anyone I was in labor (except for the Facebook status update I put up on Friday night). Savannah doesn’t seem too worse for the wear, having been born into a toilet, and now we are having fun telling her birth story. I am very proud of myself that I was able to deliver her naturally, though it really was unintentional! I am so, so grateful that it all worked out – things could have been really bad, had there been any complications and having no one else there. I am a little sad I didn’t get the water birth I wanted, but oh well.

Well there you have it, Savannah’s birth story. Hope you enjoyed. :-) 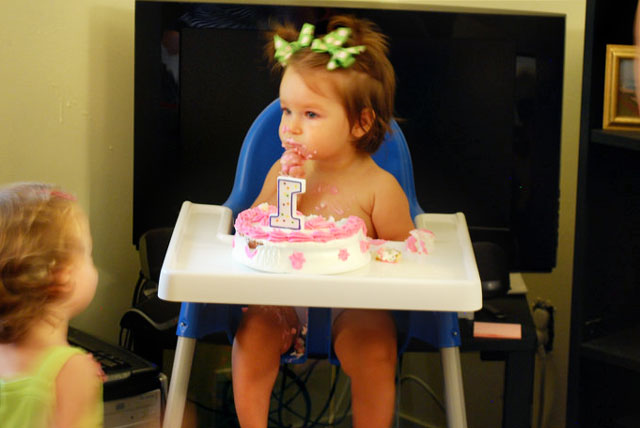