As I prepared for this birth, I thought a lot about how I felt about my last birth experience, and what I wanted to do differently/the same this time. Overall, I had really positive feelings about Savannah’s birth despite the “change in plans”. I wanted to repeat a lot of things about it (namely, the fact that I was able to let my body labor how it wanted to without having to fight hospital policies, etc). However, this pregnancy was complicated by the fact that I now knew about the Factor V Leiden and the MTHFR. I considered planning a homebirth, but ultimately decided to go with an awesome midwifery practice that delivered out of a hospital. I also hired a doula, Tracy, to help as a labor support person. I still was nervous about this birth, but I knew that I had surrounded myself by the best care providers and support people. 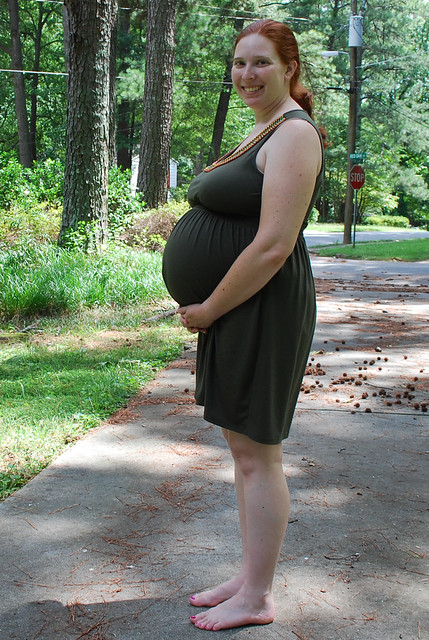 Tuesday marked two weeks exactly before my due date. I had my normal weekly non stress test at my perinatologist’s office in the morning, and they asked me how I was feeling. “I feel off,” I told them. I know the last few weeks of pregnancy can mean a lot of changes in a woman’s body, but I just felt that I was getting very, very close. I was moving very slow and had a hard time getting settled and comfortable. At the same time, I was restless. 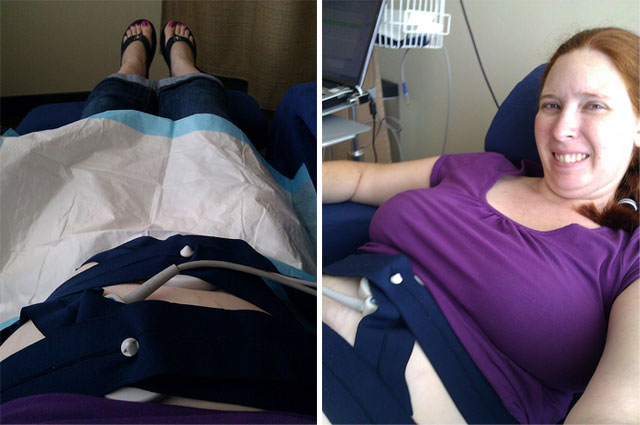 Around 8:30pm, I was sitting at my laptop when I felt a sudden POP! It actually made me jump. I felt a little bit of liquid, and at first I thought it was sweat. (It’s been so hot lately that I feel I’ve just been pouring buckets of sweat all the time.) I then realized that it was likely my water broke, so I made my way up to the bathroom. As I walked, water gushed out, and I knew without a doubt that it had indeed broke. I called Paul and told him what happened. I think it took both of us by surprise, because with Savannah my water broke just 10 minutes before she was born, and it never “gushed”.

I knew my midwifery practice had a 48 hour policy about broken waters and labor starting, so I didn’t worry about calling them just yet. Instead, I called a friend of mine, Shoshanah, who has experience with PROM (pre-mature rupture of membranes = broken waters without labor starting). She told me to get on my hands and knees to work on the ideal position for the baby while there was still enough water for her to turn. She also told me to go to bed and get some sleep.

I called my doula, Tracy, and told her what had happened and told her I’d call her back when I wanted her to come. The plan was for her to come by the house and provide support there before we went to the hospital together. Then, I went to bed.

I can’t say I was scared or anxious, but I wasn’t really able to sleep much. Savannah’s labor had started very gradually over a 36 hour period, so I was somewhat expecting more of the same. I started feeling some pressure, but not anything resembling contractions.

I don’t remember if I had been asleep or not, but the contractions started very suddenly around 3am. They were immediately intense. I tried to time them but it was difficult to remember all the numbers. I called for Paul to come upstairs and give some counter pressure on my back. The ultrasound Tuesday morning showed that the baby had flipped OP (face up), which was how Savannah was. OP means back labor and is one of the most painful ways to deliver unless the baby flips on his/her own during labor. Savannah flipped in the birth canal (we think that’s why the end of her labor was so fast), and since I hadn’t gotten much chance to try to flip the baby with positioning exercises, I was praying for a repeat of that.

My contractions were in my back, and I laid on my side with Paul behind me. After only a couple of contractions, I called my midwife (around 3:30 at this point) to tell her that labor had started and they were incredibly intense. I didn’t have a clue how far apart they were at this point, so I told her I thought it was 8 minutes. (Ha, don’t believe a laboring woman’s estimation of time.) In reality, I think they were already about 5 minutes apart.

At some point, I asked Paul to call Tracy and tell her I wanted her to come. (She lived an hour away.) She listened to me during one of my contractions and suggested that we should get to the hospital – she would meet us there. (The hospital was about halfway between our houses.) I said okay, but I continued laying on the bed – I had no desire to move! I think this was when Paul called Shoshanah to ask her to come get Savannah.

The contractions were so intense and on top of each other. They were coming every couple of minutes. I was overtaken by their frequency and intensity, and I struggled to move. I’m sure laying on my side was not the best position for labor! I started feeling the urge to have a bowel movement, which is what happened last time with Savannah. This scared me. I forced myself to relax and not try to push as hard. I kept thinking, is this the baby? No, it can’t be. I can’t do this a second time.

I kept putting my hands down trying to feel if I was actually having a bowel movement or if it was a baby. Paul mentioned that he was starting to see a lot of blood, and that scared me. Thoughts of placental abruption filled my head, and I anxiously told him to call the midwife. He tried both the midwife’s direct number to no avail, and then we had the answering service ring her (which they were unable to as well – when we talked to her later she said she had no idea why, because her phone was on and right next to her… technology!).

I felt a mass in the birth canal and I think that’s when I started to realize the baby was coming. Paul says he saw the top of her head, and he said, “Get on your hands and knees!” He told me that several times, and I moved myself to my hands and knees. Paul was behind me, and as the baby slid out he caught her and said all sorts of loving, soothing things as she started to cry. I couldn’t move at all – I felt like my muscles were gone. I looked over at one point and saw Savannah standing in the doorway looking quite terrified. I asked Paul if she’d been there the whole time, and he said yes.

I can’t remember the exact sequence of events, but everything was much calmer this time. Paul seemed to react as if he dealt with this every day. He got me to lay down and handed me the baby, who I immediately put on my chest for some skin to skin. She was covered in vernix, which I set about rubbing into her skin while trying to keep her warm with my own body heat. Paul called Tracy, who had just pulled up to the hospital, and she immediately got back on the highway and headed toward our house. (Fortunately, being 5:30am there was no traffic!) Shoshanah arrived about 10 minutes later to get Savannah. Paul met her downstairs and told her the baby had already been born. I was SO relieved she was there because not only is she a friend who has delivered two babies of her own, but she is also an ER nurse. She was completely nonplussed at the scene in our bedroom, or the sight of me laying there completely naked and covered with blood. Tracy arrived shortly thereafter, and she also was completely on top of things. She and Shoshanah checked the baby to make sure everything was okay, and set about wrapping us in towels and helping me deliver the placenta. Tracy checked me for tearing, and confirmed that I would need to be stitched up, so we debated about what to do since we still hadn’t heard from the midwife. We finally called another midwife (the owner of the practice) and told her what had happened, and she told us she’d arrange things with the hospital so that we could get down there and get everything taken care of.

Tracy and Shoshanah helped me out of bed and into some clothes, and helped me go downstairs. Then they collected all the sheets and towels we’d used and threw them in the wash. I was SO appreciative! And if you were wondering while all this was happening… After watching the baby being born, Savannah went back into her room where Paul found her sitting on her bed staring wide-eyed. She was quite traumatized! He held her as much as he could while he walked around the house, getting things for Tracy and Shoshanah. At one point I got a few minutes on the couch and I invited Savannah over to come look at the baby. She wasn’t quite sure what to make of everything. She saw the placenta in a plastic bag next to me and said, “What’s that, Mommy?” I then tried to explain to her the purpose of a placenta, which was a little over her head I think. I told her what was going on and that she was going to go home with Shoshanah, and by the time it was ready to go, she went willingly which relieved me greatly. 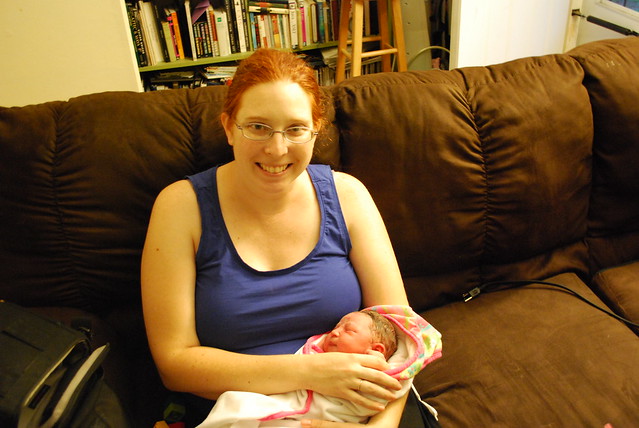 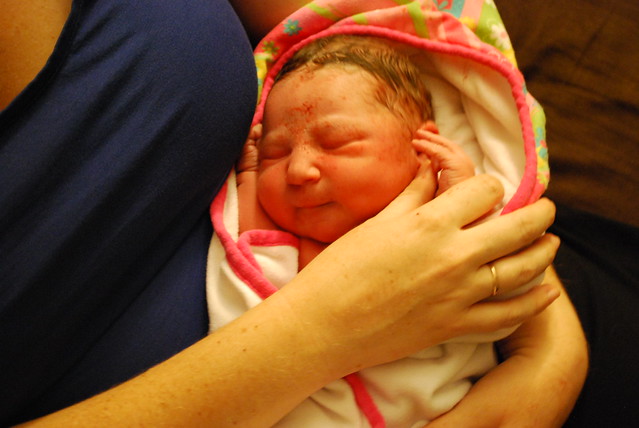 We went to the hospital, Tracy following us in her car. It was SO nice to have her there – just another comforting presence to add to my piece of mind. (When things like this happen, I tend to prefer to be told what to do by someone I trust.) They wheeled me to L&D and met the midwife there. We told her the whole story, she apologized about her phone messing up, and then she checked me for tears. Like after Savannah’s birth, this was incredibly painful and I’m so grateful for Tracy’s presence.

After getting stitched up, we were taken to a postpartum room. I am happy to say that I did not pass out this time! 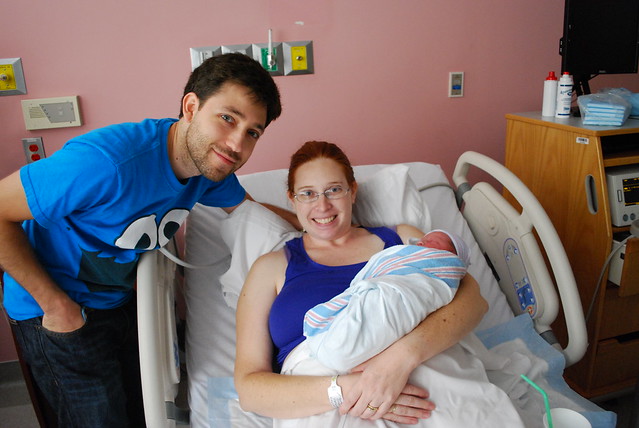 I am not sure how I feel about the whole experience. I have heard that fast labors (mine was 2.5 hours) can be very difficult for the mother because of their intensity – which is definitely what happened with me. Perhaps it’s because I’m in the midst of it right now, but I feel that the recovery has been so much more painful. I feel a little embarrassed at having two unplanned homebirths – I promise this was not on purpose! With this baby, I definitely never felt that mother gut “I need to get to the hospital” that I felt with Savannah. In fact I didn’t want to leave at all! I think next time I should just plan a homebirth. ;-) 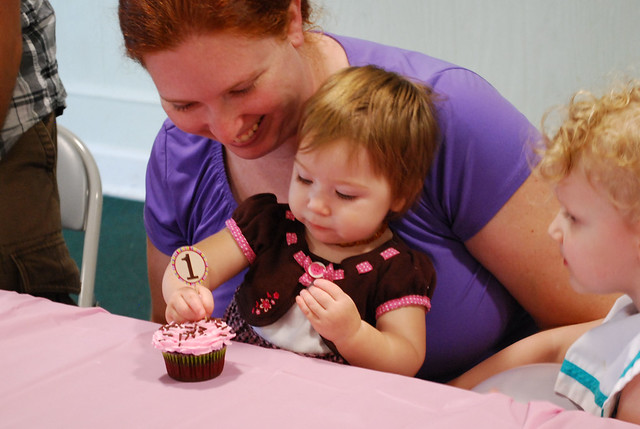