The title is a tribute to Calvin and Hobbes. These are the lazy, hazy days of summer, which I love. Paul’s two week visit is winding to a close soon, so we have been trying to pack as much fun in as possible. I love the sun on my face – especially when cruising in my dad’s convertible. I love the companionship of my favorite person in the world. And I have lived in Orlando a short enough time to still get excited about all the cool things we can do.

Last weekend we went to Port Canaveral, which is where the Kennedy Space Center (and NASA) are located. It also is one of the biggest cruise-ship ports in the United States. We like to go on Sunday evenings to Jetty Park, and wave goodbye to the cruise ships departing for the Caribbean. Then there is still enough light to play in the waves on the beach, which is what we did.

My parents and Paul and I went last Sunday, and it was so much fun. We stood on the jetty and waved to the cruise ships. As the last one was pulling out, Paul looked down into the water and was like “Look! It’s a sea animal!” I saw a thick body and a wide, flat tail disappear. Could it be…? No, that’s silly… they don’t come out in July… but it was. There were two manatees swimming around in the bay/port area. How cool! It’s very unusual that you see them in the wild, and especially in July. (Going through my head right now is the VeggieTales song “Barbara Manatee, Manatee, Manatee…”)

Here are some pictures of our wonderful day out: 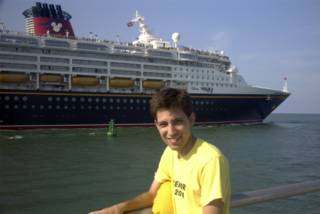 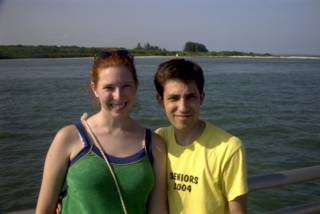 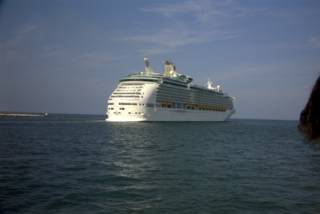 My dad says this is the biggest cruise ship in the world. One of the things sticking up on the top is a climbing wall. It’s interesting to see how many activities are loaded onto those boats. 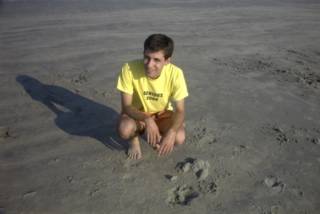 Paul the artist shows off the little sand crab he sculpted. It was really cute. :-)