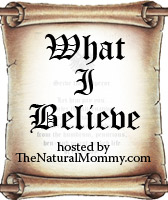 (I originally wrote this on April 4th, 2006. I wrote it just to sort through some of my thoughts. I’m not trying to put anyone down. Read more What I Believe posts at The Natural Mommy!)

I had a long conversation with my roommate last night about missions, and I realized how near and dear to my heart missions is. While I do not feel led to the mission field myself, I am excited about supporting missionaries financially and through prayer. I desire to raise my children with a missions-minded worldview.

I like my church a lot, but something I don’t like is the lack of emphasis on missions. I never really thought about it before, but last night I asked my roommate (who works at the church) about the church’s stand on missions. She explained that our church only supports missionaries who are with the ARP’s mission board, and those missionaries are salaried by the denomination (instead of raising support).

From my understanding, there are two basic ways to get money for full-time ministry (not including tentmaking). One, a single church or denomination will give a “salary” (a set amount) to the missionary. Two, missionaries raise support from churches and individuals, thus making each month’s income a different amount.

Neither way is wrong, and there are pros and cons to each side. With the former, the missionary can spend less time thinking about finances and be able to focus more on their work. They don’t have to spend as much time keeping in touch with people back home, or traveling around on furlough. They also are able to go to the mission field as soon as they are ready, and not “stuck” somewhere trying to raise money.

I see the benefits… But I also prefer the latter method of missions – raising support from churches or individuals (also known as “faith” missionaries).

With faith missionaries, the missionary is reminded that God is in control – and that He will provide the money. They spend time keeping bridges between them and friends/supporters in the States (or wherever their home country is). This not only helps encourage the missionary to see people taking a personal interest in their ministry, but it also helps remind those at home the need for missionaries and their work. I have noticed in my church that, although the church sends money every month to the denomination for missionary support, the general congregation has no idea what the missionaries are doing. It saddens me to see this lack of interest in something that is such a passion of mine. I would like to do something about it, but haven’t found an opportunity to do so yet.

One thing I have always wanted to do, and plan to do as soon as I can, is having a big world map on the wall of my dining room, and put pictures of missionaries around it with strings pointing to the location where they are serving. Then, every night at dinner, we pray for a different missionary. I want my kids to grow up constantly praying for missionaries, and have a great interest in God’s work all over the world. I want my home to be open to traveling missionaries, to find a place to sleep and a warm meal – and most of all, warm fellowship and encouragement. That is one of my greatest desires.