Mary over at Owlhaven is having a “My Childhood Home” carnival today, which I thought I’d participate in.

Actually, it’s kinda funny that I would participate in this knowing my background. I’ve moved so many times throughout my life, and more recent years have found me striving to find my niche, my “home”. I actually even did my senior art show on the topic.

I’ve lived in a lot of places, in several states and countries. However, the one house nearest and dearest to my heart can be found right here outside of Atlanta, at 17 Timberlake Cove. 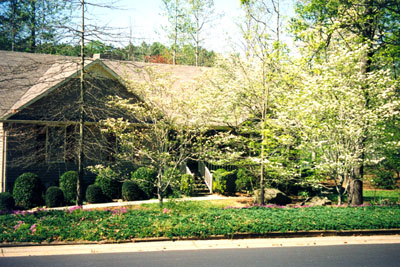 My grandparents moved into 17 Timberlake Cove back in 1988. It was a nice 3 bedroom house with a huge basement, a large yard and a lake with a dock. When my family would live there with my grandparents (on several occasions, when we were “between houses”), all three of us kids would sleep in the same room: AJ and I in the twin beds, and my sister in a little cot. There were paintings in that room that my grandmother had painted, and I would lie in bed and make up stories about the people in the paintings. There was a grandfather clock in the living room, and on those sleepless nights I would count the time by the chimes that sounded every quarter hour.

There was a big lake out back, but you couldn’t swim in it. Geese and ducks visited us on the shore, and we named one of them “Bruce”. I played many stories there in the backyard, dancing around to myself and occupying hours of my time. Sometimes we would go out in the canoe or the paddleboat. If we did that, then we would always go by the log where the turtles would sunbathe in the middle of the lake. I liked the turtles.

In the basement my grandpa had his workshop. He loves making things out of wood, and over the years he’s handcrafted several treasures: a dollhouse, a ferris wheel complete with little wooden people, a toy chest, a wagon, among other things. I used to like to wander around, looking at all his tools. He also had a room in the basement for his trains – that was cool. Later, my grandma put a sleeper chair down there for my brother when we got older. I slept down there sometimes, especially when I hit the age where I would stay up late reading and bothering my little sister.

The kitchen of the house also has fond memories for me. Many a morning I woke to the smell of bacon and coffee. My grandparents love coffee, and that smell has always been a comfort for me. I would get out of bed and go to the kitchen, and my grandmother would give me a really big hug. It’s always nice to be hugged first thing in the morning! We would always eat in the kitchen unless it was a special occasion, like a birthday or Christmas. At lunch, my grandpa would always have soup and saltine crackers. Sometimes we would watch Matlock together while eating lunch. Dinners were fun: sitting around the table with delicious beef-a-roni. I have always loved eating dinner with my family.

17 Timberlake Cove is the one house that I always went back to when I was growing up. Whenever we returned to the States for a visit or furlough, we would always go to my grandparents’ first. It was my stateside address for so many years. I learned to drive in that small town. I had a library card and often checked out books. I made friends with the neighbors’ kids. When I was in college, I returned to Atlanta for breaks because it was closer than Florida.

In 2004 the saddest thing happened. My grandparents sold their house and moved to Florida. So, a piece of my childhood is gone. I suppose that happens to the best of us; nothing stays the same. I am grateful now that I have my memories, those rich and idyllic days at 17 Timberlake Cove.