Phew, I’m tired. I had a great weekend in Nashville with Bethany. I left Friday night after work, drove through the worst rainstorm in the dark and on the mountainous part of I-24, and arrived safe and sound to Bethany’s house. It was soooo great to see her again! We hung out, talked, went to a movie, visited Opryland Hotel, bought shoes at Opry Mills, toured downtown Franklin, dressed up in fancy dresses, and watched an episode of Gilmore Girls.

Opryland is a pretty cool place. It was the first time I’d been there, and I was very impressed with the three atriums filled with live plants, waterfalls, etc. Bethany told me it was like being outside even though you were indoors, and I agree wholeheartedly. My favorite atrium was the Cascades, with all the waterfalls. 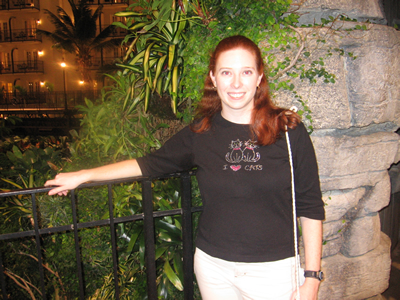 Me standing by a little tunnel thing that went behind a waterfall. I wanted to hang out behind there, but there was a couple having a private conversation, so I just walked through. Silly couples.

In the Magnolia atrium there was a beautiful gazebo. Bethany and I sat there for a while, talking about all the people we knew at Taylor and what they’re up to now. (Mostly the conversation consisted of, “Oh they’re engaged now.”) 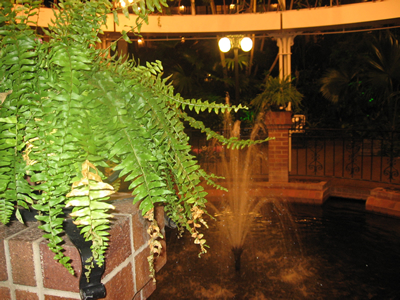 I would have taken more pictures, but it had gotten quite dark and my battery was almost gone. I also discovered later that there was a fingerprint on my lens so the top left corner of all the pictures was a bit smudged.

Later that evening, after we returned to Bethany’s house, Bethany decided to show off her prom dresses to me. I fell in love and wanted to try them all on. I put on the new shoes I bought at Opry Mills, and we took a picture. (Do you like my shoes? They’re an awesome pearly ivory color. I got them to wear to Joanna’s wedding, although I might return them if I find something else similar and cheaper.) 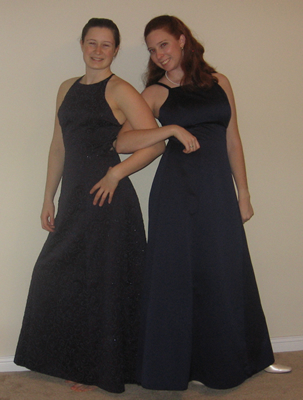 Downtown Franklin is a cute historic town with little shops and tons of historic markers. Bethany explained that there was a Civil War battle fought near Franklin, although she didn’t know the details. We decided to research it and go on a little sight-seeing tour later. (We talked about how we may know tons of history of other places, but nothing about our own area.) It was a nice laid-back Sunday afternoon, and I definitely enjoyed myself. Later in the afternoon, I left for Atlanta and started the 4 hour journey back. Overall, it was an excellent trip and I’m so glad I went! Thanks, Bethany. :-)