Thanksgiving is in two days!

I pulled out our Thanksgiving books today (we’ve been traveling, which is why I’m so late with this) and read them to the girls. I thought I’d share. (Next week I plan to do an update for my Christmas books now that it’s been a few years.) 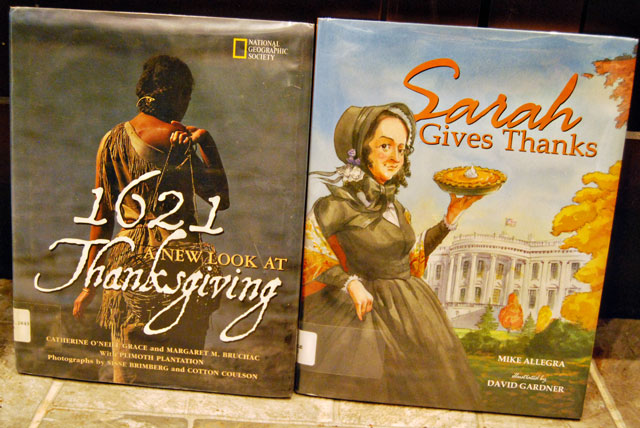 1621: A New Look at Thanksgiving
by Catherine O’Neill Grace and Margaret M. Bruchac with Plimoth Plantation

Countering the prevailing, traditional story of the first Thanksgiving, with its black-hatted, silver-buckled Pilgrims; blanket-clad, be-feathered Indians; cranberry sauce; pumpkin pie; and turkey, this lushly illustrated photo-essay presents a more measured, balanced, and historically accurate version of the three-day harvest celebration in 1621.
** We have visited Plimoth Plantation several times since my in-laws live fairly close, and this book covers a lot of what is talked about when you visit Plimoth. It’s a bit more informative of a book, so I mostly skimmed it with the girls. It’s a really good look at the Pilgrims, the Wampanoag people, and the actual facts of the traditional “First Thanksgiving”. I am glad to be able to talk about these things with my kids.

Sarah Gives Thanks: How Thanksgiving Became a National Holiday
by Mike Allegra

During the nineteenth century, Sarah Josepha Hale dedicated her life to making Thanksgiving a national holiday, all while raising a family and becoming a groundbreaking writer and women’s magazine editor. Sarah Hale’s inspiring story, accompanied by luscious watercolor illustrations, tells the tale of one woman who wouldn’t take no for an answer.
** A great story that talks about how Thanksgiving became a national holiday, without it being about Pilgrims. I enjoyed this story of a widow who was persistent in her quests for her passions. Also, a good reminder to be thankful for what you have even in times of little. 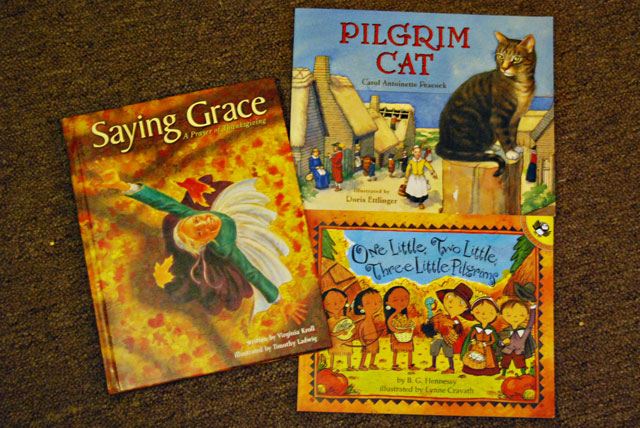 These are a few of the Thanksgiving-themed books we own. (The others I think are more twaddle-ish, which is why I didn’t include them here.)

Saying Grace: A Prayer of Thanksgiving
by Virginia Kroll

Find special mealtime prayers and Thanksgiving activities inside! Grace’s mind was racing. What was that spelling word that meant ‘great generosity in giving’? She squeezed her eyes shut, and it came to her. Bounty. That was the word! Journey back in time with Grace and relive both the hardships and blessings along with her pioneer family. Saying Grace tells the story of one girl and her discovery of the value of mealtime prayer at her family’s first Thanksgiving.
** Another nice story of one family’s Thanksgiving celebration without it being about the Pilgrims. My favorite part of this book are the beautiful illustrations. This is a Christian book about giving thanks and praying before mealtimes.

When young Pilgrim Faith Barrett discovers a stray cat on the Mayflower, she names her new friend Pounce. Together they face the long, cramped voyage and the perils of the first winter at the Plymouth colony.
** I picked this up this past summer when we visited Plimoth because it was about a cat (of course). It’s a cute little story that follows a little girl and her mouser cat on the Mayflower and their first year in the New World and the first Thanksgiving.

The activities of ten Pilgrims and ten Wampanoag Indian children as they prepare for a splendid harvest feast at Plimoth (now Plymouth Plantation) are described using the familiar childhood rhyme.
** I was suspicious of this book when I first saw it, but I actually ended up liking it. It’s very simple for the littlest ones in your house, but adorable illustrations and tell a bit of a story of Pilgrim and Wampanoag children getting ready for a Thanksgiving feast.