Hanging out in the birthy crowd here in Atlanta, I’ve come across the word “Blessingway” frequently. I had never heard of one before, but as I learned about them I really liked it. It’s similar to a baby shower, except instead of showering the new mom with presents, you shower her with blessings. It’s a time to celebrate, encourage, and empower the mother as she prepares for her upcoming birth. How beautiful!

You can read more about them here.

Since we had a second girl, we didn’t really need anything and so we didn’t have a shower. I felt sad, though – as if Caroline was just a “copy-paste” and not worth celebrating. Of course that’s not what anyone is trying to say, but it’s how I felt. I thought about throwing myself a Blessingway (not sure if you can plan one for yourself?) and now I wish I had. Every child is worth celebrating. :-)

I had the wonderful opportunity to attend a Blessingway of a dear friend on Friday! I had a delightful time. It started at 7:30, and I ended up leaving close to 1am! I had no idea it was that late until Paul called, worried.

We had been told to bring a bead and a poem/quote/letter to read to the mom. I brought the bead, but totally forgot about the poem. (Oops!) We sat in a circle and read her our poems and talked about the beads. The beads were all put on a string for her to keep with her as something tangible to bring her strength in labor. I thought that was a really neat idea. 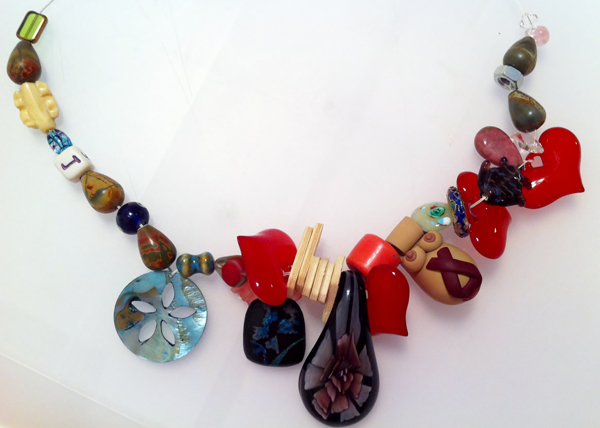 An example of beads from a Blessingway – Image credit: The Feminist Breeder

The hostess had written different empowering words on rocks and placed them in a shallow bowl of water. We were instructed to each take a rock home and when we find out the mom was in labor, we are to meditate/think about the word and think positive thoughts. I chose the word “Strong”. I know my friend is strong, and I am praying for not only strength labor but also strong bags of water for her. I am praying that her third baby is born in the caul.

There was also someone there doing henna, so I got a flower on my foot. I really enjoyed it, and I think it’s such a beautiful ceremony to help a mom welcome her new baby. Something I’ve learned in the past few years is the power of finding your tribe, your sisters, other women to uplift and support you. They are an integral part I think of surviving motherhood! I am honored to be part of her tribe (as she is part of mine, and played a major role in Caroline’s birth).

UPDATE: Here is my friend’s post about her blessingway (Mother’s Blessing) complete with pictures. :-)

7 thoughts on “my first blessingway”