Cloth-diapering moms love to talk about their stash. Seriously, it’s a bit ridiculous how long I could have a conversation about diapers!

So I talked a bit about cloth diapering as inexpensively as possible. You can build a pretty good stash including accessories for $200 or less. For a lot of moms, that’s enough. But, there are many different types of diapers out there, each with their own pros and cons. It can be confusing, so I’ll try to explain some of the lingo associated. I’m also including as examples some brands that I’ve used or have been recommended to me by other cloth diapering moms. 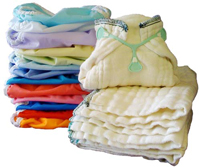 Prefolds: I talked about prefolds in my other post. Prefolds need a separate diaper cover and also will probably need a Snappi or diaper pins for fastening. I talked more about diaper covers in that post, so I won’t repeat myself.
Examples of prefolds: Green Mountain Diapers (Indian Prefolds), Chinese Prefolds
Examples of covers: Thirsties Duo Wrap, Bummis Super Whisper Wrap, Blueberry Coveralls 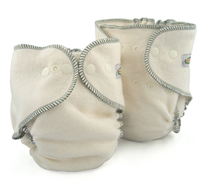 Fitted: These diapers are tailor fitted to be snug around the baby. They attach around the waist with either snaps or hook-and-loop (generic term for Aplix and Velcro closures). Because of this, they have a trimmer fit and less likelihood of leaks than prefolds. They are also easier to use than prefolds. I’m told that fitteds are a good choice for newborns. These diapers will need a separate diaper cover.
Examples: Kissaluvs Fitted, Thirsties Fab Fitted
Examples of covers: See “Prefolds”, above

Contour: A cross between a prefold and a fitted diaper. These are in the shape of an hourglass and are more economical than a fitted, but easier to use than a prefold. They do not need diaper pins or snappis, but they will need a separate diaper cover.
Examples: Kissaluvs Contour, ImseVimse Contour
Examples of covers: See “Prefolds”, above 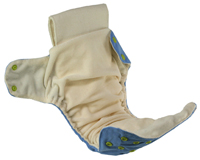 Pocket: These diapers have two layers: a waterproof outer shell (same as a diaper cover) and a stay-dry interior (often microfleece or cotton). The layers are sewn together to form a pocket, in which an absorbent insert is placed (this is called “stuffing” the diaper). These diapers are quick and easy-to-use, but require a bit of prep work after they’re washed. No separate cover is needed.
Examples: Baby Kangas, FuzziBunz, bumGenius, Thirsties Duo 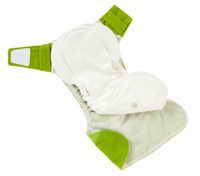 All-in-two (AI2): These diapers have two parts: an outer shell (same as a diaper cover) and inner absorbent soaker. They are different from a pocket because the soaker either snaps in or lies inside the shell. An advantage is that one shell can be used for multiple diaper changes (just changing the soaker), provided that the shell doesn’t get soiled. Sometimes AI2 and hybrid diapers are combined as the same thing, but there are slight differences. Also, some AI2 can also be pockets – stuffing is only necessary when you desire more absorbency, like for nighttime diapering.
Examples: Econappi, GroVia Shell Set 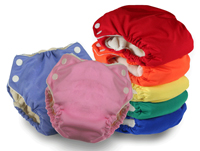 All-in-one (AIO): As the name implies, these diapers are the absorbent soaker sewn together with a waterproof outer shell. They are one piece and ready to go – no folding or stuffing necessary. Because they most resemble disposables, they are often a good choice for babysitters. I feel like often, pocket diapers and AIOs are combined into the same category.
Examples: bumGenius AIO 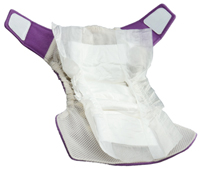 Hybrid: Hybrid diapers are rather new, and are a cross between cloth and disposables. Generally, they are a reusable outer shell and a disposable insert that is environmentally friendly. This is a good option for traveling or for people who are environmentally-conscious but for whatever reason don’t want to or can’t do full cloth. Some of the hybrids also have reusable soakers for when washing isn’t a problem. When used with soakers, the diapers technically fall under AI2 category, which is why these two categories are often combined.
Examples: GroVia, Flip, gDiapers

One-size (OS): One-size diapers have snaps or elastic that allows you to change the size of the diaper so that it will have a tight fit as the child grows. These are becoming very popular, as it’s possible to use the same diaper from birth to potty-training. It saves money in the long run, though it might not be ideal for the extremes (newborns or older potty-trainers) Most one-size diapers start at 7 or 10 lbs. Snapped to their smallest setting can be really bulky on the tiny baby. Any of the above diapers can also be one-size, except perhaps the prefolds.
Examples: Blueberry One-Size, Happy Heinys

Hook-and-loop (h&l): Generic term for Velcro or Aplix – a common way for cloth diapers to fasten around the baby. This makes the diaper more like a disposable, and a lot of people prefer the ease. The alternative is fastening with snaps.

Since this post is getting long enough, I will continue it tomorrow with a post about how to most effectively build your stash. Stay tuned, and I hope all this lingo hasn’t lost you yet!

3 thoughts on “building your stash: the lingo”