This week has been busy at work, with lots of exciting stuff going on. Last December, the president of the company announced to us that they had bought a building because we had expanded to the maximum capacity of our current place. This was exciting news for all of us, especially when they told us that they were planning to fix up the new building really nice, and turn it into an “advertising agency we can all be proud of”. We have been talking about “the new building” for over six months, eagerly anticipating the move. And this week was The Big Week. On my boss’ birthday no less. :-)

I am going to miss the old office a little bit. They had let us pick our own office colors, so I (of course) picked purple. I didn’t intend for it to be quite as fuerte as it was, but it didn’t bother me. The lighter color was called “imagine” – I thought that was cool. :-) 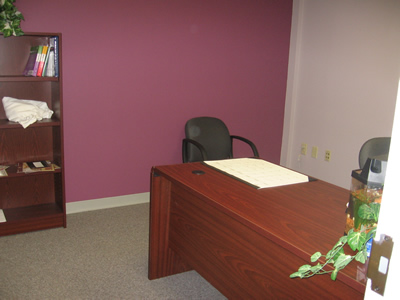 Here is my office, taking the picture from the doorway. Unfortunately, it was an inside office so I didn’t get a window. :-( You can see my purple walls, though. I never did get around to hanging anything on the walls. Perhaps I will do that in my new office. 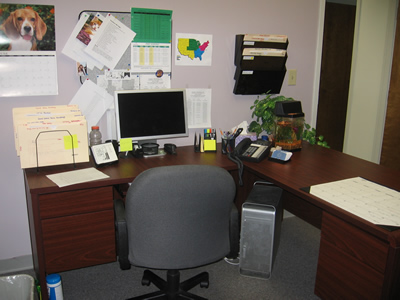 My desk area – a bit more interesting than the wall behind me. ;-) I am one of the few people in the office who always has a neat desk. On the right is my fish, Rusty (he’s Zeke’s successor).

One of the main reasons why we don’t like the area where our office is. This Mexican strip club is only one building over. The whole area is slightly on the seedy side. The new building is in a much nicer area – lots of trees and other corporate offices. I feel much more comfortable walking to work. :-)

Thursday (yesterday) was the day of the Big Move. They took us down at 11am – the servers, internet, phone, etc. were all turned off and moved to the new building. We were frantically trying to finish everything we needed before then. Then we boxed up our offices and the common areas. I had the wonderfully pleasant task of throwing away all the food in the refrigerator. It was disgusting!

Thursday afternoon we were given the go-ahead to move our stuff to the new building. They weren’t really ready for us, so we just piled all the computers/boxes/etc in an empty office and went home. I got to go home with Paul at 4pm so that was fun. :-) Today more was done by the time we got to work. My office was carpeted! Hooray! :-) We don’t really have “offices” per say; they are more like “cubicles” but they are built into the ground with counter height desks going all around. Also, the walls are straight on two sides and go up in a diagonal on two sides. It’s really hard to explain so I’ll have to put up some pictures when I take them. They are fairly private and pretty cool, I think. I had to wait until around 3m today before they finished building the desk in my office, and then I was finally able to set up my computer. It was a weird day, with half of us being unable to work, and those who had important stuff were going around trying to use other peoples’ computers. It was crazy! I think next week we will have settled down a bit and hopefully get into our routine.

I’m really excited about this change, even though I will miss my purple office. And now that the office has moved, I’m even CLOSER to work (and I wasn’t far to begin with!). Starting Monday, I will be walking to and from work every day. Fun, fun.