A few months ago, I volunteered to be head of a volunteer committee at work. My bosses put a great emphasis on giving back to the community, so they have an annual community service project we participate in as a company. This year, I did some research and discovered a place called Cafe 458 in downtown Atlanta – a cafe-style restaurant that serves free meals to the homeless with the respect they deserve. It was a neat opportunity and I’m glad we got to go. However, it got me thinking about what service means, and why we even bother to do it.

When I was in high school, NHS (National Honor Society) was a really big deal. They only let a select group of about 10-12 people (out of 400 in the school) into NHS each year. Throughout the year, we did a lot together – retreats, fund raisers, community service projects, etc. Some of my best high school memories were from the 2 years I was involved in NHS.

I remember we were in the midst of planning the induction ceremony at the beginning of my senior year. It was always a big deal – a school-wide assembly/ceremony, with the top-secret new members being announced. We usually had members of NHS each do a speech, and at the time they were looking for a fourth person to do a speech on “service”. For some reason, I raised my hand and volunteered. 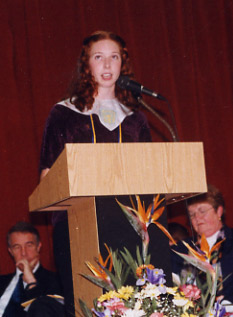 I was really nervous, and spent a long time preparing for it. Afterwards, a lot of people came up and complimented me. I was glad that I had taken the opportunity to do it, and I am thankful to God that He gave me all the right words to say!

Below is a copy of my speech that I gave that day in September of 2000. (Notice some concepts taken straight from the Bible!)

When I sat down to write this speech, I started really asking myself, â€œWhat is service?â€ I knew I wanted to say something along the lines of service not being just going to Community Service. But I really didnâ€™t know how to say that.

So I enlisted the help of some friends, posing two questions. One: â€œIs service about attitude or action?â€

Mother Teresa once said, â€œIt is not how much you do, but how much love you put into the doing.â€ Service is stereotypically about heroically donating your time to be with a poor person dying in the hospital. Yet, if thatâ€™s the attitude you have, then is that really service?

Service should be a sacrifice, not an obligation or something that looks good on your transcript. Service is looking to the interest of others. Itâ€™s a willingness to do your best. Itâ€™s perseverance; pushing on even when it might be easier to quit.

The second question I had was: â€œIs service for yourself or others?â€ This is a bit more difficult, because it is hard to distinguish who benefits more, the giver or the receiver. For, as someone once said, â€œYou canâ€™t help someone up the hill without getting closer to the top yourself.â€

We should do nothing out of selfish ambition, but in humility consider others better than ourselves. Humility goes along with attitude- being humble about the time and money you spend helping others. Mother Teresa tells us, â€œLet no one ever come to you without leaving better and happier.â€

Service shouldnâ€™t have expectations. If you anticipate something in return for every hour you spend helping someone else, then it isnâ€™t really service. Itâ€™s a business deal. Service results from an honest feeling of compassion and a desire to help others.

The best thing about service is that it can be demonstrated in almost any situation. A lot of people think that service is only visiting orphanages or organizing fundraisers. Many overlook the small, unnoticeable aspects. Being there for someone who needs a friend. Helping a new student find a class. Brushing off a little boy who fell on the sidewalk. All of these are good examples of service. Putting a smile on someoneâ€™s face can be just as important as donating $1000 to charity.

So why is service so important? Itâ€™s something that everyone can do. You donâ€™t have to have high grades or show strong leadership skills or have outstanding character to help someone. Because, in the end, everyone involved is affected.