For Christmas, I gave my sister a ticket to go see the new Georgia Aquarium. (By the way, I love the design of their website.) It opened a little over a month ago, and is the world’s largest aquarium. It was pretty incredible, and we both enjoyed it. I’d love to go back during a non-holiday season when the crowds are sure to be lighter. And if I can ever afford it, I’d love to get a season pass. I’d like to do research on the fish, because I think things are much more interesting when you know about them.

I have this incredible urge to watch Finding Nemo now. :-)

My sister and I went through all the pictures I took, and we narrowed it down to… 15. :-) What can I say? It was very incredible. So bear with me as I post 15 of the best pictures that I took. :-) 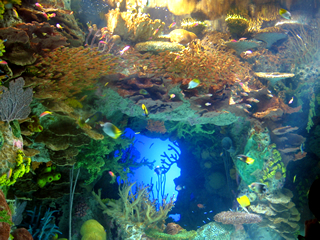 There were five sections of the aquarium that had different groups of fish. This was from the Tropical Diver: A Coral Kingdom (coral reef) section. A scene from a Pacific Barrier Reef… the fish were so pretty, all bright and colorful. Notice the blue fish: it’s Dory! (a palette surgeonfish) 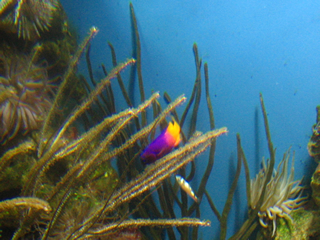 Look, it’s a Taylor fish! I thought this was the prettiest one – a royal gramma. 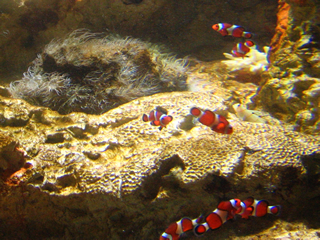 Some of my favorite fish are clown fish. What can I say? The movie made me fall in love. If I ever have a saltwater aquarium, I would love to get some of these. First I have to learn to say “anemone”. :-) 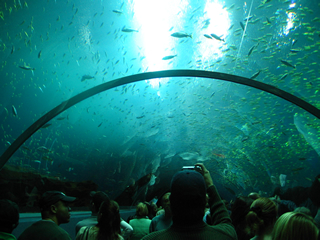 In the Ocean Voyager: Journey with the Giants section, we went in a tunnel where we could see all the fish around us. These fish weren’t as pretty, but they were much bigger in size. 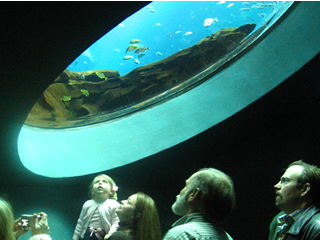 This little girl was completely mesmorized by the fish ahead. She was so cute I just had to take a picture. 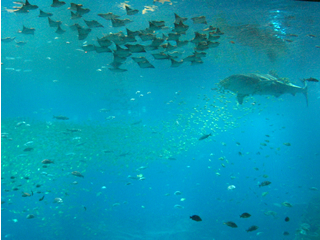 To the right, there is a whale shark, which is the biggest fish (since whales are mammals). My all-knowing sister told me they can get to be about 45 feet. They seemed to like the yellow fish that you can see in the picture. There were also lots of stingrays that were hanging out in clumps. I liked watching them swim. Also in this exhibit were toothy cubarra snappers, schools of predatory trevally jacks, an enormous goliath grouper, and hammerhead sharks. 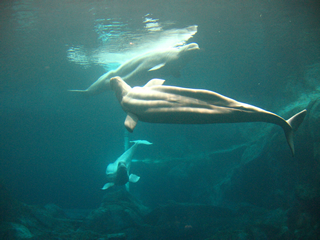 Here are three Beluga whales. These whales are unique among other whales because they can turn their heads. In the Cold Water Quest section, we saw a lot of arctic mammals and fish, like seals, sea lions, and sea otters. I couldn’t get a good picture of any of those because they were so playful and swimming very fast. A group of African penguins, penguins that live in the temperate waters off the coast of Africa. They were very excited to be fed. I think they’re cute. 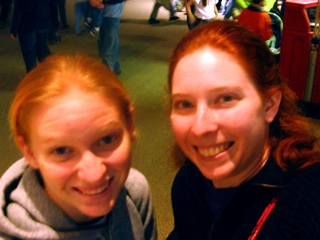 My sister and I paused for a Kodak moment. :-) 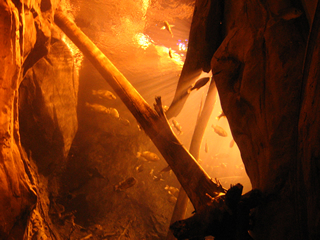 I thought this was a pretty cool artistic picture. It was taken in the River Scout: Freshwater Mysteries section. I liked the Amazon part of this exhibit, mostly because it reminded me of Peru. 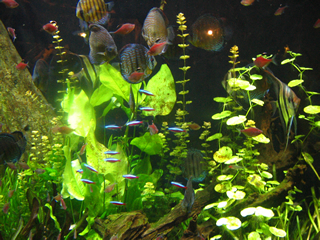 Discus fish and neon tetras. I love neons; some of you may remember that I had a tank of them at Taylor. 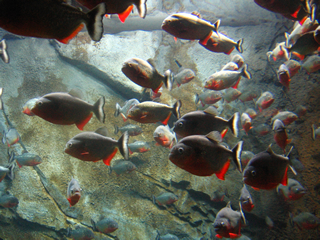 Ah, another memory of Peru… Here are the piranha! They can easily tear through flesh with their razor-sharp teeth, so you don’t want to meet them in a dark alley. 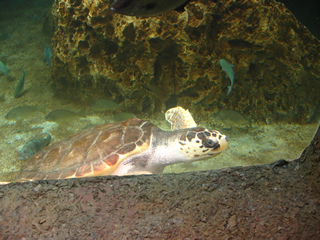 A sea turtle! This was in the Georgia Explorer: Discover Our Coast section, which contained all fish that live off the coast of my great state, Georgia. There were also lots of animals that you could touch, which didn’t interest me, but I’m sure it is fun for kids. 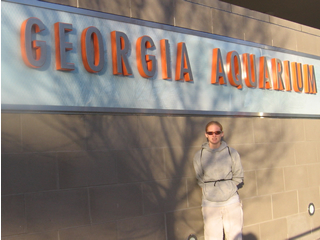 Amy outside by the sign. She’s Jo Cool with those awesome shades.

We had lots of fun. Amy’s favorite part were the whale sharks. She also liked the shirt in the gift shop that had a picture of a piranha and said “BITE ME”. I saw several shirts that I wanted to get for Olivia. One had a picture of a shark and said “I chew on everything”. (It seemed appropriate based on what Beth has told me about her dear daughter. :-)) Also there was an adorable shirt with sea otters on it, and it said “Plays well with otters”. Hehe Beth if you come down and go to the aquarium with me, I’ll buy Olivia those shirts. ;-)

If you’re still reading this after 15 pictures, then I commend you and say you’ll have to go see it for yourself. :-)