I *hate* spiders. Really, I do. I don’t know why, but when we were little, my brother had a book on spiders and a book on snakes. The snakes were pretty cool, I thought, but I couldn’t *stand* to look through the spider book. It gave me the creepies.

That being said, a new spider has taken up residence on my porch. He’s as big as the other two combined. I watched him make his web which was pretty cool, I must admit. Now he can move away. I am scared he’s going to bite me (or my kitties).

Do spiders this big kill wasps and bees and such? Because if he does, then he’s welcome. I hate those flying stinging insects even more than spiders. But since it’s fall and I haven’t seen many around, I doubt it.

I think growing up in a desert has given me a fear of bugs. All we had were cockroaches. I don’t like them either, but that’s because they’re gross not because I’m afraid of them.

Oh Susan, since you’re oh so wise about spiders and everything else should I be afraid of him? Perhaps an immigrant spider from Louisiana? 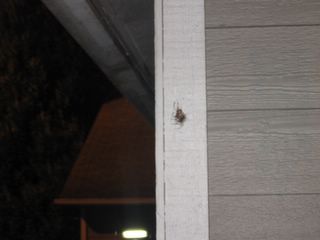 I was trying to get a shot that would help you see how big he is. I hope you can get an idea from this picture, even though it’s fuzzy.

UPDATE: After searching online, I’ve determined that this spider is an orb weaver, which is apparently unlikely to bite me. He’s still big though. :-( Here is a picture that I found online; after studying this picture and the spider on my porch I think it’s the same one.