One day a month or so ago, I left my house to go pick up Savannah from school. While I was in the carpool line, a friend whose son also attends the preschool called and asked if we wanted to stay and play in the playground for a little bit. That sounds like fun, I thought. While we were there, I got a phone call from my neighbor. She doesn’t speak English, and phone conversations in Spanish are very difficult for me, so I ignored the call and figured I’d go over and talk to her when I got home.

We didn’t play long – I was only gone from my home for an hour – but when I rounded the corner to my house and saw police cars up and down the street, I had a sinking feeling in my heart. There were a lot of people milling around my house, both doors were open. I remember seeing my fall wreath that I had just hung on the front door the day before was on the ground and people were stepping over it.

The police officer tried to wave me on as I pulled up to my driveway, but when I told him I was the homeowner he immediately called over the detective. The bad news: three people broke into our house. The good news: my neighbor saw them and called the police, who were able to catch the guys in the act. Wow! It was all very overwhelming for me to deal with and try to sort out in my brain. The police officers had me stay in the car until the robbers were taken to the jail, but then I went to the car to identify my things. There were items that didn’t belong to me, so I wonder how many other houses they had hit.

All total, they took my laptop, the broken laptop, my camera, some jewelry (nothing of value), our microwave, Paul’s guitar, some foreign coins (nothing valuable), and my iPod. I believe they were in the middle of taking the TV when the police interrupted them, because we found it sitting on the coffee table, unhooked from everything. All of these items were taken to the police station as evidence, and I didn’t get them back for 4 days. It was very frustrating to be without my laptop, and I unfortunately was unable to take pictures at a big birth center event that weekend, but I know that the police were hard at work building a case against the robbers, so I tried to be patient. :-) 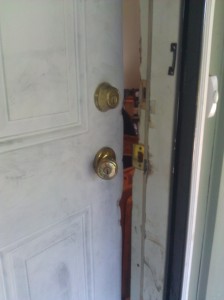 This is what I came home to. We have a steel door and a deadbolt. My neighbor said it took them only 5 minutes to get in with a tire iron. 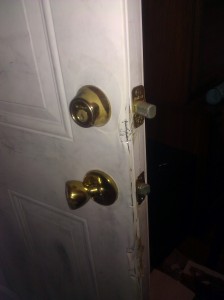 See how they completely bent the doorknob? 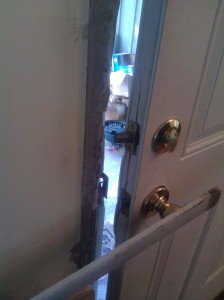 The door itself cracked, and completely broke the door frame. 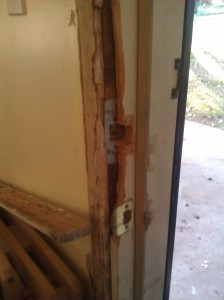 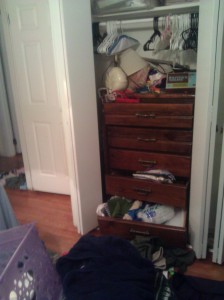 They trashed the house, too, looking for things. No stone was left unturned in the master bedroom. This is actually the guest room – they went through all the drawers and boxes. They actually tore apart boxes trying to get in, which made us sad because in a couple of instances the boxes were valuable. One had been decorated and had many memories, one was for an unopened product that we were considering returning to the store, and one was for an unusually shaped item that fit into the box. Small stuff, but frustrating nonetheless. 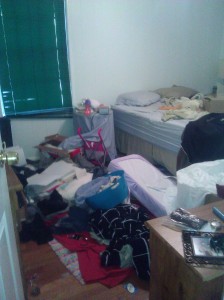 They did the worst damage in the master bedroom. They went through all the drawers, threw everything off the top of the dresser, flipped the mattress. I think the thing that felt most violating to me was they went through all the baby’s stuff too – her clothes, the cosleeper, her changing pad. Savannah’s room seemed mostly untouched – they pulled some stuff from her closet – but didn’t go into her drawers. I was relieved at that. 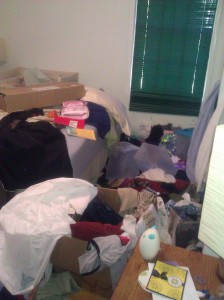 They basically emptied our closet onto the floor. It was a MESS. And so overwhelming – it took me two weeks before I finally went through everything and put it away. I was sad that they ripped open some pillows. We had NO cash and NO jewelry hidden anywhere. But, this tells me that simply hiding something isn’t good enough. They covered a lot of ground in only 10-15 minutes. (Neighbor called at 1:25, I got home at 1:45 and the police had already gotten there by then.) 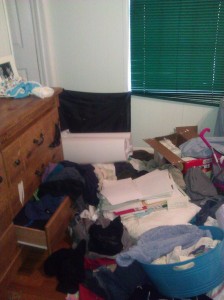 Another view of our room. So overwhelming, and so violating.

Paul was fortunately able to come home. It was several hours before I was allowed back into the house. Then we had to figure the rest out… We were without a door, and we needed to get a new one before night. I am SO grateful to a friend who let us use their minivan to get a new door from Home Depot. Our church was on a retreat (we were actually supposed to join them the next day but we didn’t feel safe leaving), and we called up there and our pastor was able to hook us up with someone willing to come out that night to install it.

Overall, we lost our microwave (it fell out of the robbers’ car onto the road and broke) and my headphones for my iPod, which really isn’t bad at all. I since found out that our insurance doesn’t cover stolen property, so we would have been TV-less/laptop-less/camera-less/etc. had the robbers not been caught. We still haven’t replaced our microwave, so that’s been an interesting adventure.

I feel very violated and a little bit unsafe. I actually kept Savannah home from preschool the following day (she was also a little sick), and I’ve been doing a little research into alarm systems. Coming at the same time as a load of other major expenses, it has been emotionally very draining for me. I keep going back to being SO SO SO incredibly grateful that my neighbor was in the right place at the right time, and she pushed past her language barriers and was able to communicate with the police. I also had a really good experience working with the police in our town – they were great, and kept me in the loop about everything, and they certainly responded fast.

I think I’ll add new headphones to my Christmas list. ;-)