Savannah decided to make it a great mother’s day by waking up during the night and then getting up early this morning. Fortunately, Paul was so very gracious to let me sleep in and he and Savannah made me breakfast and a card.

After church, we came home and Savannah took a nap. Afterwards we went down to Centennial Olympic Park in Atlanta, where Savannah had the best time playing in the fountain! Here is a fabulous picture: 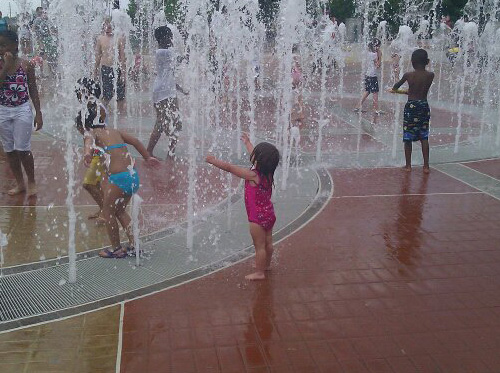 I also took some video, but the camera is upstairs and I’m lazy so I’ll have to get it later. :-)

I wasn’t sure how she’d like the fountains, but after an initial period of caution she really had such a great time running around and sticking her hands in the water. When we had to leave, we dragged her kicking and screaming. We’ll definitely have to do that regularly this summer.

We also stopped by Coldstone Creamery on the way home, and we were going to do some shopping (my favorite thing! ;-)) but Savannah would have none of that. We are now home and Paul is taking a nap. (Preparing for mother’s day is exhausting!) I’m tired too. I guess I should go make dinner though before Savannah needs to go to bed.

I feel like the past few weeks have been really busy for me. I think I’m going to try and limit our activities this week, just for a break. And to save some gas money. :-)

One thought on “mother’s day”