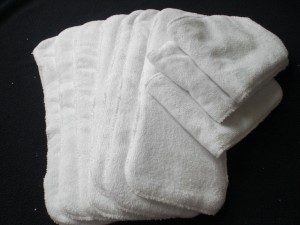 One of the popular things in cloth diapers right now is to stuff pocket diapers with microfiber inserts. Microfiber is a synthetic fiber that absorbs a lot of moisture, cutting down on the bulk of cloth diapers. It is also good for nighttime diapers as it can hold a lot of liquid.

The bulk of my diaper stash are Baby Kanga pocket diapers, stuffed with bumGenius microfiber inserts. (See the picture to know what a microfiber insert looks like.) For about a year, I was pretty happy with them and didn’t have any issues at all. Then, I started having smell issues. I felt like I was just washing them over and over. After we bought the house, we discovered that our pipes need to be replaced – they are old and rusting, so our water is full of minerals. I found a detergent for cloth diapers that’s made for hard water like ours. I was really excited! I was hoping this would be the trick needed to get my inserts smelling like new again.

Well, long story short, after about 2 months or so I had to stop using the detergent because it gave Savannah *such* a bad diaper rash. I ended up doing disposables for most of the month of December, and then after Christmas I stripped the diapers. I boiled all the inserts, and then washed them in Calgon (a water softener), and then washed them without detergent or Calgon about 5 times. They smelled brand new after I finished, and I switched detergent.

In the meantime, I’ve done some research about microfiber and found some stuff that has made me sad. For one, microfiber is terrible with hard water. It tends to trap the minerals from the water, and people often have smell and repelling issues after about a year. I’ve also discovered that front-loaders do a poor job of getting diapers clean (I wish I’d known this when we bought our washer and dryer new while I was pregnant!).

So, the short is that I need to replace all the microfiber inserts. I think I’m going to go with all-cotton prefolds to stuff in my pocket diapers. I also want to get more soakers for my GroVia system – they are all-cotton as well, with PUL backing. It’s a bit frustrating, but you live and you learn, right?

9 thoughts on “love/hate of microfiber”