I have like 2 minutes to get a post up before I miss my little brother’s birthday. :-) I thought I’d repost something I wrote two years ago for him when he turned 21! I hope you enjoy. :-)

In one week, I will be getting married. Wow! 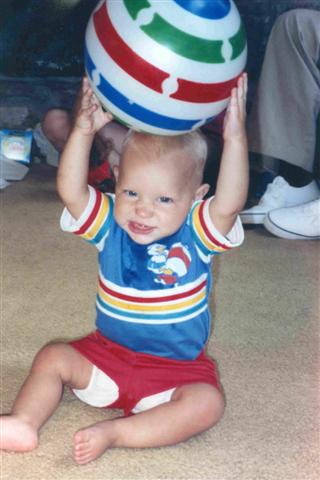 But more importantly, today is my little brotherâ€™s 21st birthday! It seems hard to believe. Just 21 years ago, I was in the hospital asking my mother in my little 2 1/2-year-old-voice, â€œWhoâ€™s the babyâ€™s mommy?â€

AJ and I havenâ€™t always gotten alongâ€¦ In fact I can remember one day during church he punched me in the stomach. So much for being good missionary kids. :-) I used to chase him around the playground hitting him though. Wow, now that I think of it, Iâ€™m surprised people (i.e. my parents) would allow that! Poor AJ. I think we became friends when I finally learned to listen to my mother and ignore him. Wow, what a difference that made!

Despite the fighting, AJ and I used to play together. We didnâ€™t have many other playmates, so I would convince him to play Barbies with me. â€œYou can play Ken, AJ,â€ I would say. Then AJ would proceed to give Ken superhuman strength, having him lift cars and other heavy objects, until I protested so much I made him leave. We would play Legos together though, for hours on end. I would give each little person names and personalities, and AJ would build the coolest boats or spaceships (we went back and forth between Lego Island and Lego Spaceship).

AJ also consented to play dolls with us. I had a lot of dolls – a family of 12 actually, and a dog. Each of them had distinct personalities and carefully picked names, plus birthdays I would celebrate on arrival. (Rainbowâ€™s birthday, for example, was 2 weeks ago todayâ€¦ a fact which I acknowleged in an IM to AJ, inviting him over for a birthday dinnner. She would be 16 today. Crazy!) AJ had a bunch of stuffed animals with very creative names like â€œBearâ€ and â€œDinosaurâ€ and â€œBunnyâ€. It was fun, though.

AJ and I went to the same high school for 2 years, before I graduated and went on to college. We had mutual friends during that time, and often hung out together after school. I have fond memories of that time. We used to go to Big Apple Bagels, movies every week in the summer, stuff 9 people in a taxi, watch 3-2-1 Penguinsâ€¦ Itâ€™s been really fun to have him as a brother, and Iâ€™ve enjoyed being friends with him (much nicer than being enemies!). I hope he moves up to Atlanta so I can spend more time with him. :-)