This is a picture of Koko and Yum Yum. 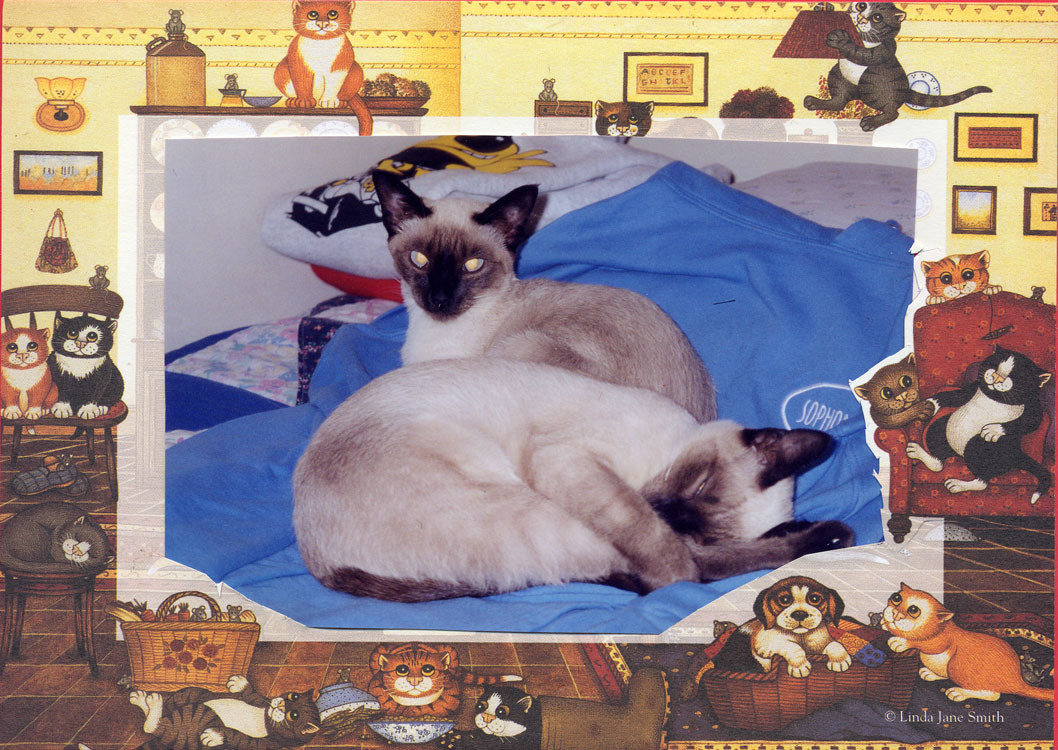 Koko and Yum Yum joined our household on February 1st, 1999. I remember getting the Sunday paper and looking for ads for kittens. We went over to the house – a small house, with 9 cats (they said). It smelled like it too! We picked up the two tiny kittens and held them close, and then we went home. Since they were Siamese, I decided to name them after the cats in my favorite series of books at the time, “The Cat Who…” series. Now I wonder why I would name a cat Yum Yum…

They were such sweet cats, not like the Siamese breed you see in the States (I blame overbreeding). They never yowled or climbed the curtains. They were friendly and liked to cuddle. They looked exactly alike and at first I could only tell them apart by the color of the collars. I don’t think my dad ever knew which was which. Over time, I learned how to distinguish the two based on personality and texture of their fur. Koko was always hungry and more vocal. She was also the friendlier one. Yum Yum had softer fur and more aloof, but I won her over. They loved each other, and would play together all the time. Jo and Paul Loeb, animal trainers and writers, once said, “The best exercise for a cat is another cat.” And they were right! Koko and Yum Yum were the best of friends.

When they weren’t playing together, they were sleeping together. Sometimes it was hard to tell when one started and the other ended. They looked like “yin and yang”, to quote Qwilleran. I loved them so.

The last time I ever saw Yum Yum was on February 21st, 2001. Neither of my cats were allowed outside, but Yum Yum would look out the window longingly, so we started letting her out in the mornings for short periods of time.

This particular morning, I remember sitting in the living room reading (I was on summer vacation, for all you northern hemispherers). Koko came in, crying pitifully. Since it wasn’t anywhere near a mealtime, I immediately suspected something was wrong. “Where’s Yum Yum?” I asked Koko. Meow, was the reply.

I searched the house frantically. No Yum Yum. I called my mom who was at work, and she said she had called Yum Yum that morning but the cat never came. I was worried and heartbroken. The next few days, I spent my time making “Gato Perdido” (Lost Cat) posters and asking all the local business owners if they had seen a little Siamese kitty. No, they shook their heads sadly.

I don’t remember when I realized that Yum Yum wasn’t coming back. I know it broke my heart, and that Koko was lonely. I mourned for her, and somehow moved on. Four months later, I cried as I handed Koko to my dad’s coworker. I never saw Koko again, either. We left for the States a week later.

I grieved for my cats, and moved on. Then, a few days ago, I got an email from my mom.

My mom is in Peru right now for meetings. She was talking with the woman who currently lives in our old house. The woman mentioned a Siamese cat who came in and just made itself comfortable inside the house. The cat belonged to the neighbors, the woman said.

My mom showed her a picture of Yum Yum. Could this be your cat? My mom asked. It could very well be, was the response.

When I found out, my first thought was amazement. Six years later, my lost cat was found? How often does that happen? Wow!

My next thought was, I want my cat back! She was taken from me. (We think the neighbors took her, since it was very unlikely that Yum Yum would have ran away.) I know, this is silly. I have two lovely cats now, and I am living in a whole different continent.

My last thought was sadness. Suddenly, all the memories of Yum Yum came back. The good, the bad. The painful memories of when she disappeared. The heartache, the sadness, the agony of realizing she would not return. Koko’s plaintive meows, her loneliness. And she was right next door the whole time? I should have been better. I should have asked around more. I should have showed the neighbors Yum Yum’s picture. I should have, I should have….

To most people, this sounds silly, I know. I am not sure why I have felt so down about this situation. Perhaps because I have already grieved for my cat, and put it behind me? That I moved on, and now it is all being brought to the surface again? That the knowledge that even though Yum Yum is back, it is doubtful I will ever see her again? I ache to rub my face in her fur and cuddle her close to me, but it will never happen. It could – I could throw caution to the wind, spend all my savings on a plane ticket, and fly to Peru. I could – but I won’t.

So here I am, enlightened in the whereabouts of my missing kitty, yet still sad. I wish things had turned out differently, but such is life.

I am going to go cuddle with Lewis and Ebony now.