I originally posted this on my Onward and Upward blog. Please go there to leave your thoughts/comments! 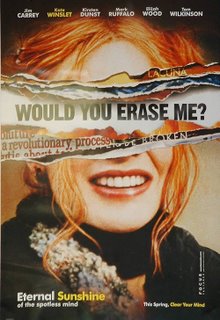 A few weeks ago, Paul and I rented Eternal Sunshine of the Spotless Mind (starring Jim Carrey, Kate Winslet). I had it recommended to me by several people as a movie I would enjoy, and they were right (I love it when people know me so well they can correctly recommend movies!).

The premise of the movie is about this couple, Joel and Clementine, who are in a serious relationship for a few years. Then they have a fight, and Clementine goes to a clinic that erases memories for you. Joel finds out that Clementine has erased her memory of him, and decides to get the same procedure. However, as they’re erasing his memories, he discovers that not all memories are bad, even if a relationship didn’t work out. It made me think of memories and the role of them in our lives. I like it when movies challenge me to think, and it’s especially nice when it can lead into a discussion between Paul and I.

I shrugged the movie off as “something interesting to think about, but unrealistic” until this morning. I saw this article and video clip about a new drug that, when taken, is supposed to make certain memories less poignant. It’s rather interesting – having to do with suppressing the adrenaline that makes you remember things (“suppressing” perhaps is the wrong word, but from the article that’s my understanding). The obvious benefit is for people who struggle with PTSD (post-traumatic stress disorder), such as rape or a bad car accident. It makes me think of my boss’ grandmother who accidentally hit and killed a pedestrian crossing the interstate. A drug like this could help her (another others) able to function in life without the horrific memories replaying themselves over and over in their mind.

And of course the downside – what limits would be placed on such a drug? How about an unconfessed murderer wanting to forget the crime he committed? Perhaps the protagonist of Poe’s The Tell-Tale Heart, or Raskolnikov of Dostoyevsky’s Crime and Punishment would have appreciated something like this!