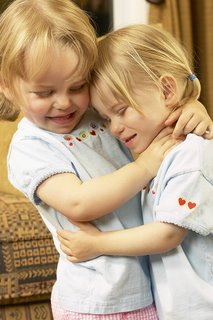 Jenny, pardon me if I steal your post for a minute!

I was reading my cousin’s most recent blog post yesterday, and it tugged at my heart. There was an adorable picture of her twin daughters giving each other a hug.

Jenny’s thoughtful response reminded me of my own sister. She’s 5 years younger than me, and it hasn’t been until recently that we have gotten to be close. The same goes for my younger brother. In many ways, we have been better friends as adults than we were as children.

While in my younger years, I may have wished to be an only child, I do believe my siblings have been a gift from God. Often in our young lives we were all each other had, as we moved from city to city and country to country. We sometimes fought bitterly and other times played lovingly. However, in the end we were family and that transcended all other previous disagreements.

Since I love quotations, here are a few about sisters and the relationships you have with them:

Having a sister is like having a best friend you can’t get rid of. You know whatever you do, they’ll still be there. ~Amy Li

To the outside world we all grow old. But not to brothers and sisters. We know each other as we always were. We know each other’s hearts. We share private family jokes. We remember family feuds and secrets, family griefs and joys. We live outside the touch of time. ~Clara Ortega

A sister is a gift to the heart, a friend to the spirit, a golden thread to the meaning of life. ~Isadora James