A few days ago, Lewis and Ebony got a card in the mail. It said “Happy Birthday from Petsmart!” Inside was a coupon for a free birthday gift. I thought that was the coolest thing! Today, my babies Lewis and Ebony turn two. Ah, they’ve entered their terrible twos. I hope it’s not too bad! ;-) 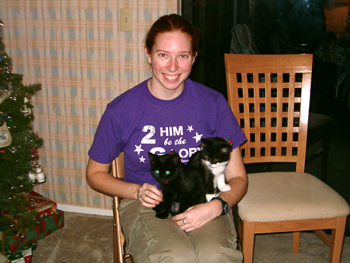 It seems just like yesterday… It was mid December, and I wearily pulled up to my parents’ house in Orlando. I had been driving for two straight days, finishing up my exams and managing to pack all my things into my car, leaving my student life at Taylor forever. It was quite an emotional time, and I was glad to get home.

Everyone was in the living room. They all greeted me, and my mom tells me to go into my bedroom. She had rearranged the furniture and she wanted to see how I liked it, she said. Okay, I told her (any excuse not to have to unpack the car!). Dropping my things, I opened the door to my room. There, at the end of my bed, lay two adorable little kittens. Their eyes were big as they stared up at the strange creature who just entereed the room. Around their necks were two large Christmas plaid bows. They were precious.

I don’t remember saying anything, just gasping and immediately taking both into my arms and holding them. My family was grinning out in the living room. Apparently, they had been planning this Christmas surprise forever! I named the male black and white Lewis, after one of my favorite authors, C.S. Lewis. I named his sister Ebony, after the dark black of her coat. 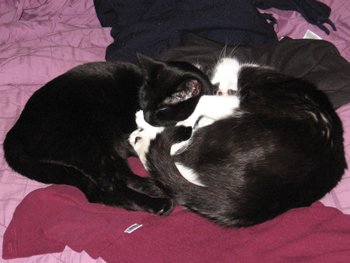 These two have been my pride and joy since then. They have kept me company, provided laughter, and been someone to come home to. When I was living by myself, I knew that there would be two felines rushing to greet me the minute I opened the door at the end of each day. That always warms me through and through. (Now that Paul gets home and feeds them before I get home, they aren’t QUITE as eager to greet me at the door. I’m sure the two aren’t connected at all.)

So, happy birthday Lewis and Ebony! You’ve been a very special part of my life, and I feel so blessed to have little kitties to share my days with! Here’s to many years to come! *Lewis and Ebony blow out the candles on the tuna casserole cake*