I am a thoroughly exhausted but happy girl today… Last night was much fun. :-) The only downside was that they were late picking me up, so the Phantom had already started when we got there, for which I was very sad. I also felt bad for the people who had to move so we could get to our seats. Other than that, it was a delightful evening.

I must admit, the movie did somewhat spoil the spectularness of the play for me… I still enjoyed it, but in some ways I wish I’d never seen the movie. However, I still managed to get lost in the play… Trying not to sing along with every song, frightened anytime the Phantom made one of his appearances. The last time I saw Phantom, I didn’t know the storyline at all, and so was somewhat confused. Now, four years later, I am very familiar with both the music and the story, and so understanding what was going on made it that much more delightful.

After it was over, we stopped on the steps to take some pictures.

The wind caught the skirt on my dress just right. My fairy dress, as I call it. :-) 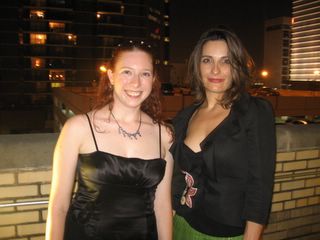 Afterwards we went to the Ritz-Carlton Hotel and got a nightcap. I told them to order for me, and I got an almond creamy drink (can’t remember the name). I didn’t like it much… I don’t think I’m a big fan of creamy drinks. I like the clear ones better.

All in all, a good evening. I slept very heavily last night and woke up stiff… Guess I was pretty tired. :-) Now I have to figure out what I need to do today… Totally overlooked Saturday in my excitement for Friday! :-)