Lewis is much better! I am so glad. I had taken him to the vet yesterday for his one-month checkup (for the crystals in his stomach), and his bladder was empty (for the urinalysis) so I had to leave him there all afternoon and pick him up after work. I noticed that he was very different when I picked him up – lethargic, not moving or crying. He wasn’t eating or using the litter box (I don’t think he had the energy to get up). I thought they had drugged him and it would wear off by morning, but this morning he was still very “out of it”. He was awake, but just curled up somewhere, looking dazed and glassy-eyed. Concerned, I called the vet. They told me they hadn’t given him anything so that made me even more concerned.

However, he seems to be much better. I am so relieved! He’s still a bit stiff, but he was wanting to be pet and cuddled when I got home from work, which is normal. And he was yowling for his dinner. I fed them both and a little while later I noticed that Lewis had pushed Ebony out of the way and was finishing her dinner for her. Ah, back to normal. :-)

I am so very relieved! I am fully confident that he’ll go back to waking me up at 5-6-7 in the morning starting tomorrow. :-) 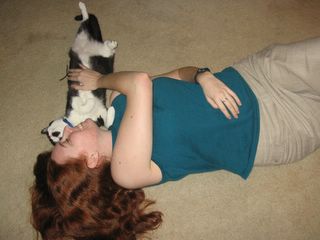