Today I stumbled upon a rather interesting website which made me laugh because it was quite ridiculous. A very fundamentalist group is doing book reviews of popular Christian series for children. The funny thing is they did all the series that I grew up on as a child. Their reasons for why all these books are evil are quite humorous. I could include lots of snippets, but I think I won’t. But if you want to read about how C.S. Lewis is bad (“Mr. Lewis proves everything through his own logical arguments and examples. Like some other apologists, he treats Christianity as a belief system, as opposed to other belief systems such as atheism or Buddhism.”) and how Chronicles of Narnia are leading our children down a very wrong path (“[Lewis] built entire surrealistic worlds for our children to escape into â€” escape from reality and from real life.”), then I would recommend this site. You should also check it out if you’re concerned about your children’s literature including the Mandie series, the American Girl series, Anne of Green Gables, Little Women, and Christy.

I had to pick up my sister from the movies today and we went to the pet store afterwards. I wanted to check on the cost and details of baby turtles. I’ve been wanting a turtle for a long time; even before I got Zeke. While we were there, my sister and I wandered through the cat section. I usually avoid the cat section because it would remind me I didn’t have a cat, but today I joyfully went through to see how much I could spend on my newest charges. :-)

My mom’s been after me to construct some sort of climbing tree for them out of a bunch of wood and carpet we have. So my sister and I were trying to get ideas. We found one we liked: 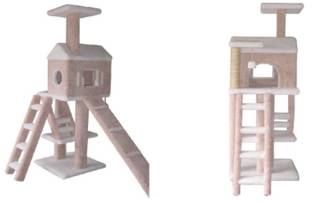 Mom mom thinks the ladder is unnecessary, but we’re trying to convince her that the last two cats we had loved ladders. (They did. Whenever a ladder was out, they would climb on it. It got awkward when you were on the top of the ladder. :-)) Amy and I also found a catnip spray that we’re going to spray on the carpet to make them like it. This thing is 22 x 22 inches and 64 inches tall. My mom tells us we need to make it smaller. I don’t know yet. :-)

Here is the latest picture of Lewis and Ebony. Aren’t they sweet? I’m obsessed, I know. :-p

QUOTE OF THE DAY: ashalily26: you don’t want to burn your bridges before they hatch