Spunky is the family dog. She was originally my brother’s dog, but after we had her for a few years we realized that AJ really didn’t care about this dog, and Amy (being a complete dog and animal lover) did. So she was “given” to Amy.

My family has always been an animal-loving family. It’s not just a love for cats for me (and I’m the only one in my family who loves cats), but a love for all animals (hence my love for Zeke). People who grow up with animals tend to understand a love and compassion for animals. Like when I got the frog and it wouldn’t eat, and I was all concerned and had to make an emergency trip to Petsmart. My roommate, Tree totally understood and even lent me her car on the occasion. My boyfriend (now fiancÃ©) Paul didn’t understand. However he is totally willing to humor me in my plans to have a zoo when we’re on our own. In addition to the (at least) two cats, we will also have a few aquariums, hamsters, lizards (I like the Leopard Geckos), small turtles, frogs, ducks, etc.

But I was talking about Spunky. We’ve had her for about 6 1/2 years now… She’s a world-class traveler having flown from Peru to the States in 2001 when we moved here. She loves the States much more… Mostly because we have a yard here and she can run and run and chase geckos and ducks and all sorts of fun stuff. She’s a lot calmer now than she used to be; she used to bark whenever she thought someone might be passing in front of our house. Fortunately she’s doesn’t do that anymore. :-)

It’s taken a good five years for me to warm up to Spunky (being a dog) but it’s not so bad anymore. Not that I’d get a dog any time soon, but I’ll tolerate her. Especially now with my sister gone for the summer, I feel so bad for Spunky; she needs the attention. So I occasionally take her on walks and stuff.

She has this little quirk about her that’s actually quite amusing. We give her dog biscuits throughout the day as a reward for when she does her thing in the yard (rather than the house). She won’t eat the buscuit unless I (or someone else) tries to steal it from her. When we lived in Peru and we had our two Siamese cats, I would call the cats, and as soon as they would sniff the biscuit Spunky would immediately be interested in eating it. I guess she likes the competition.

Well I must go clean the porch in preparation of our visitors next week (!!!). I’m excited because the visitors are my Paul and his siblings. Yay!! :-) I’m also excited because his sister is coming and I can have a girl around to do girly things with. :-) Like… show off my wedding dress… :-) 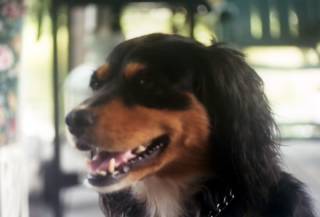 here’s one of my favorite pictures of Spunky