Well, tonight Paul and I FINALLY hung the stuff on the walls and I cleaned the living room, and decided to get some pictures! I hope you like the new look!

Here is a picture of my living room before I started (more pictures if you follow the link above):

I have been working on it off and on over the past 6 months. Here is the (almost) finished product (haha, I feel like this is Extreme Makeover: Home Edition!): 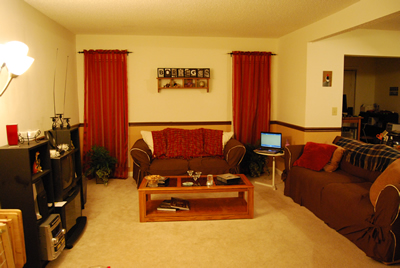 I started off with picking a color theme for the room – reds, browns, and blacks. I tried to focus on red and dark brown and tan, and work in the other colors as I came across them. For the most part, I was fairly successful! I got slipcovers for the couch and loveseat at Kohl’s, as well as the throw pillows on the couch. They were each around 40% off, so I was happy. The blanket on the back of the couch is one I had from Peru – it’s made of baby alpaca fur and it is soooo soft and incredibly warm! Very nice in the winter. I picked up the red blanket on the loveseat from Target. I had been admiring it for some time, and when I decided to pick it up I was delighted that it was on clearance! Too bad I wasn’t able to get the matching pillows. I think the colors work really well together.

My dear sister helped me paint – tan on the bottom and dark brown on the chair rail. I got the curtain material from Joann’s and Susan helped me sew them. (The curtain rods came from Ikea.) I am really happy with the curtains. They are striped red, with the parts in between translucent. So, they don’t block the light as much which is something I wanted. 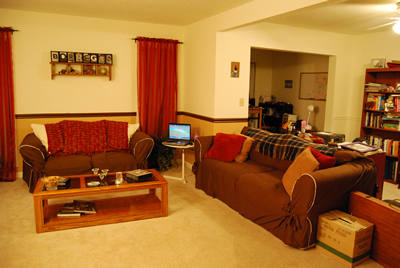 One thing I read as I was looking at home decorating blogs for ideas was that when you have a long room or a hallway, you need something to visually block the way or it will just seem long and narrow. You can’t really tell from these pictures, but there is a hallway leading from the front door right into the living room. I turned the coffee table so it’s parallel to the loveseat, and that made all the difference in the world! It brought the living room much closer, and didn’t seem so skinny. Also, it’s easy to push the coffee table out of the way if we need the floor for anything.

The shelf above the loveseat came from Ikea. Paul and I went to downtown Atlanta a few months ago and I took pictures of letters that made up our last name. I printed each letter in black & white, and got frames for them. I am excited by how this project turned out! I’d like to retake some of the letters with my new camera and see if I can’t get them more clear, but for now this will do.

We got a laptop tray thingy from Ikea as well (love that store!). It’s proved itself very useful, as before the laptop was always kept on the couch. To the right of the couch is a temporary barrier we have set up to keep Zoey in the living room. It’s easier to watch her that way. :-) We’ll remove that when she’s housebroken. I am looking forward to that day! 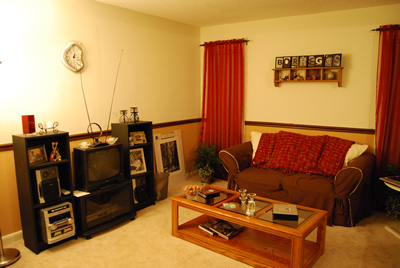 I ended up going with the fake plants, but no one has seemed to notice so far. I am glad, because the cats and dog are always getting into the plants and knocking them over. Can you imagine what a pain it would be if I had to clean up soil all the time??

There are a few things on the coffee table that I meant to remove. I had set them down instead of taking them out of the room and I didn’t even notice while I was taking pictures! The poster on the floor near the window is a Ansell Adams photograph. When we get a frame for it, we’ll hang it on the wall. That’s why I say the room is ALMOST done! I just knew if we waited until we got a frame, then I’d never get this post written. 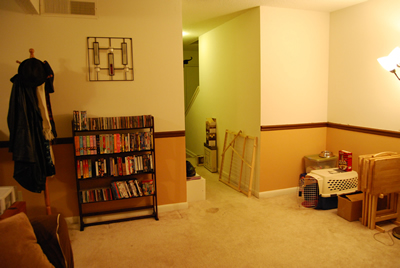 This picture isn’t as interesting. I apologize for the mess in the hallway. :-) To the right is the corner with all the dog stuff. It seems to be all nice and neat. Normally, there are dog toys all over the living room. I put them all away for the picture – poor Zoey. :-) I moved the DVD/CD shelf over a bit to center it more with the wall, and I hung a candle and mirror thingy above it. I stuck the coat rack in the corner – it looks great there! The coat rack is more decorational than functional since it’s not by the door, but I like it. It’s more useful in the winter. 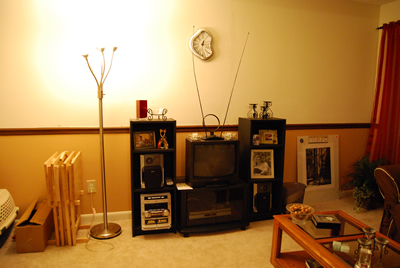 I was really excited about the entertainment center! I don’t like the bulkiness of some of the big one-piece units, but I wanted to clean up what was there. (I like things nice and neat.) I had the TV stand already, so I decided to get two bookcases from Ikea to put on either side for the stereo. They originally were white, so I had to spraypaint them black. I LOVE how it turned out! Exactly what I wanted – neater without being overwhelming. I also now have some space to display some special things. On the second shelf on the left is our wedding cake topper – the two cats. :-)

Like I mentioned before, we’re going to hang the Ansell Adams poster on the wall on the right. I’d like to get another similar poster for the left. I think it will look really nice! The TV stands make a nice barrier from the TV and the dog stuff. Also, they are easily accessible which is good because we use them all the time.

I am really happy with how it turned out! And I didn’t buy any new furniture. :-) (Except the bookcases.) We also redid our office, and I took before pictures for that. I’ll have to take some after pictures and then post them all. (Warning: the office is pretty boring. I didn’t do much decorating.) Next up: our bedroom. I plan to work on that throughout September. Note to self: take some before pictures!!